Realme is spotted to have two new smartphones in the works with model numbers RMX2063 and RMX2001. The database of the Federal Communications Commission (FCC) in the US has hinted at the existence of the two new Realme phones that would debut as the company’s next-generation affordable models. The new development comes in the midst of rumours suggesting the launch of a new Realme flagship with the Qualcomm Snapdragon 865 SoC. The premium offering is tipped to come with a hole-punch display design.

As per the listing on the FCC site, the Realme phone with model number RMX2063 measures 163.9×75.8×9.4mm and weighs 196 grams. The phone is also listed with ColorOS 7, suggesting the presence of Android 10. Further, the schematics available in the FCC database show a power button on the right and a volume rocker on the left. It also appears to have a 4,300mAh battery on board.

Realme hasn’t yet revealed any specifics around the listed phone. However, its India variant carrying model number RMX2061 reportedly received a BIS certification.

The dimensions and weight difference of both surfaced Realme phones suggest that they wouldn’t be the two variants of a single model. However, considering their model numbers, both are likely to be the upgrades in the Realme X-series. The Realme X had RMX1901 and RMX1951 as the model numbers to give some perspective. 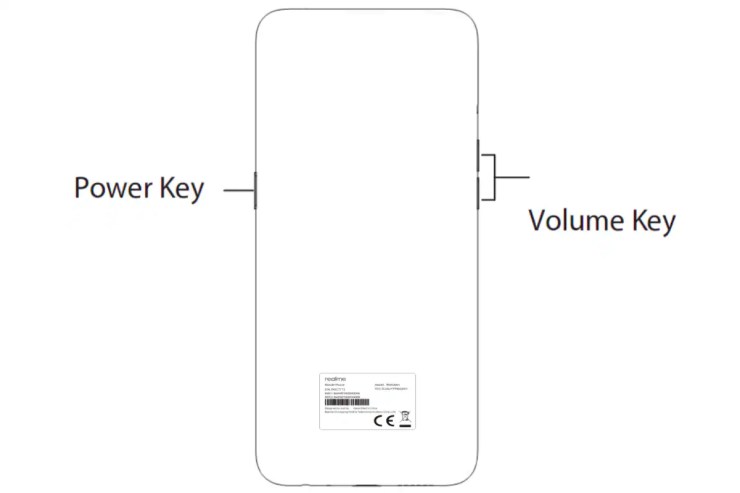 Realme RMX2001 seems to a power button on right and a volume rocker on left — just like the RMX2063
Photo Credit: US FCC

Having said that, it is also speculated the unannounced Realme phones may be the Realme 6 or new Realme U-series phones.

SlashLeaks reported the existence of the Realme RMX2001 and RMX2063 on the FCC database. However, Gadgets 360 was able to independently confirm the listings of both phones.

Last week, the Realme C3s was purportedly spotted on the US FCC database with model number RMX2020. The phone was found to have a rear-mounted fingerprint sensor and an oblong camera module at the back. This is notably not the case with the newly emerged Realme phones that don’t appear to have a fingerprint sensor at the rear side.

A Realme phone was also recently spotted on benchmark site AnTuTu with model number RMX2071 and Snapdragon 865 SoC. It is believed to be the flagship device of the company. Furthermore, the phone is likely to be showcased at MWC 2020 in Barcelona next month.

Advertisement
Related Topics:4300mAhBatteryCertificationColorOSFCCRealmeRMX2001RMX2063
Up Next

Pete Lau on Twitter posted pictures with the tagline “What do you think this is?”. This could be possibly the folding screen hinge mechanism of the upcoming OnePlus phone. Although the company has not confirmed anything, it is largely speculated that the OnePlus Fold may break cover soon. It is rumoured to come with Android 13.

OnePlus hasn’t yet revealed any details about the foldable so far. But it could offer some similarities to Oppo’s Find N which was launched in December 2021.

The Oppo Find N sports a 7.1-inch inward folding display with a 120Hz refresh rate and a 5.49-inch cover OLED display. It is powered by a Qualcomm Snapdragon 888 SoC, coupled with up to 12GB of RAM and up to 512GB of storage. For optics, the Oppo Find N has a triple rear camera setup with a 50-megapixel Sony IMX766 primary sensor, a 16-megapixel ultra-wide angle lens, and a 13-megapixel telephoto lens. A 32-megapixel camera on the outer screen, a 32-megapixel camera on the inner screen, 4,500mAh battery with 33W SuperVOOC wired charging support are the other key highlights of the phone.

Should you pick Vivo over Galaxy S22 and OnePlus 10 Pro? We discuss this on Orbital, the Gadgets 360 podcast. Orbital is available on Spotify, Gaana, JioSaavn, Google Podcasts, Apple Podcasts, Amazon Music and wherever you get your podcasts.

The Samsung Galaxy Z Fold 4 and Galaxy Z Flip 4 are set to hit stores in the coming weeks with minor upgrades over their predecessors — the Galaxy Z Fold 3 and Galaxy Z Flip 3. Pre-booking for the devices in India will start on August 16 at 12pm (noon). Both the new phones are powered by Qualcomm’s Snapdragon 8+ Gen 1 SoC and support a variable refresh rate. They have Corning Gorilla Glass Victus Plus protection on the display and rear glass and are IPX8 rated for dust and water resistance.

What should you make of Realme’s three new offerings? We discuss them on Orbital, the Gadgets 360 podcast. Orbital is available on Spotify, Gaana, JioSaavn, Google Podcasts, Apple Podcasts, Amazon Music and wherever you get your podcasts.
Affiliate links may be automatically generated – see our ethics statement for details.

Blu Bold N2 was launched in the US on Friday. The company’s latest smartphone sports a 6.6-inch full-HD+ AMOLED display. It is powered by an octa-core MediaTek Dimensity 810 SoC, coupled with 8GB of RAM and 256GB of inbuilt storage. The handset is equipped with a quad rear camera setup with a 64-megapixel primary sensor, a 2-megapixel depth sensor, a 5-megapixel wide-angle shooter, and a 2-megapixel macro lens. It also features a dual camera setup at the front. The Bold N2 also features an in-display fingerprint scanner and AI face identification.

Blu Bold N2 has been priced at $249 (roughly Rs. 19,800) in the US for the sole 8GB + 256GB storage variant. The smartphone is currently available via Amazon in the US. The Bold N2 is sold in a single Cyprus Teal colour option. The company is yet to reveal its availability and price details in other markets, including India.

Blu Bold N2 is a 5G smartphone that runs on Android 11 out-of-the-box. The handset sports a 6.6-inch AMOLED display with full-HD+ (1,080×2,340 pixels) resolution, and 393ppi pixel density. The display is protected by Corning Gorilla Glass 5. The Bold N2 is powered by an octa-core MediaTek Dimensity 810 SoC, coupled with 8GB of RAM.

The new Blu Bold N2 features an in-display fingerprint scanner and AI Face ID for unlocking the handset. For connectivity, it supports 5G, 4G LTE, Bluetooth v5.1, and Wi-Fi. It also gets a USB Type-C port for charging. The Bold N2 packs a 4,200mAh battery with 30W MAX Quick Charge support. It measures 158.7 x 74.1 x 8.6mm, and weighs about 180g, according to the company.

What should you make of Realme’s three new offerings? We discuss them on Orbital, the Gadgets 360 podcast. Orbital is available on Spotify, Gaana, JioSaavn, Google Podcasts, Apple Podcasts, Amazon Music and wherever you get your podcasts.
Affiliate links may be automatically generated – see our ethics statement for details.